The Tutu Memorial Plaque is presented to the Club Member who has demonstrated outstanding commitment and dedication to the principles of the club throughout the preceding financial year.  Their contributions embody the true spirit of membership, both in terms of fellowship and also event participation.  The recipient of The Tutu Memorial Plaque will be a positive and active member who consistently demonstrates goodwill towards the club and its members.

Tutu was a rescue Dobermann who, luckily for her, came to live with Frank & Dorrie DeCatania.  Tutu competed in obedience and tracking, and she was the first ‘associate’ dog to attain the title of Westralian Obedience Champion.  In those day dogs also had to get their TDX to gain their AOC title.  This title was newly created for Tutu, after the ANKC  protested about the CAWA awarding the AOC title to four sterilised GSD’s before her (at this stage dogs had to be entire to qualify).  Rick Richardson was commissioned to design the certificate.

Frank was a Tracking Judge and wanted Tutu to be remembered, so he donated the Tutu Memorial Plaque for Club Person of the Year to Trackwest. 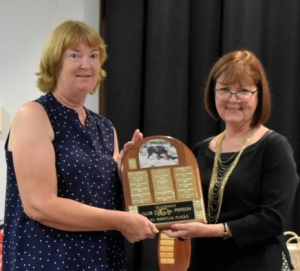